The Safety-to-Autonomy Curve: An Incremental Approach to Introducing Automation to the Workforce

The Safety-to-Autonomy Curve: An Incremental Approach to Introducing Automation to the Workforce 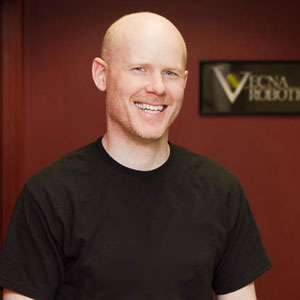 Daniel Theobald, CTO, Vecna Technologies, Daniel Theobald co-founded Vecna in 1998 with the mission to empower humanity through transformative technology.  Vecna is a leader in logistics ...  More >>

Robots are cropping up in every industry, from consumer goods to manufacturing to hospitality, and everywhere in between. It’s no secret that robots will change the way we live and work, but the adoption of automated solutions in the United States has been slow going. According to a recent study by PWC, 41 percent of manufacturing companies surveyed said they do not currently use robotics technology and they don’t intend to in the next three years. This study cites the perception of cost effectiveness of robots, that robots displace workers and lower morale, and insufficient resources and expertise to run the robots as the reason for reluctance to adopt robots into the workforce.

“By adopting the Safety-to- Autonomy approach, policymakers, business owners, and the workforce can prepare for the New Robotic Economy”

These perceptions are based on the “Big Bang” theory of automation: that robots can be introduced to a workplace suddenly and instantly achieve complete automation for some processes. However, by introducing robots to the workplace incrementally, potentially negative impact to worker morale is mitigated, and expertise can be acquired through on-the-job introduction to new tools. By doing so, the robot’s ROI increases steadily over time.

How is it possible to introduce a robot over time? Through paying keen attention to safety first.

When introducing automation and autonomy, safety must be the top priority. In 2013, the National Safety Council estimated that the total cost of wage and productivity losses due to safety-related death and injury was $188.9 billion in 2011. For example, 90 percent of all forklifts will be involved in some type of accident during their useful life, causing 1 in 6 of all workplace deaths, at tremendous cost to the industry. So what does safety of human-operated machines have to do with robotics?

Robots use many sensors to understand and make sense of their environment and act appropriately. The sensors that ultimately may give a robot its autonomous capabilities can at first be used for basic safety monitoring features aboard equipment already used by human operators.

For example, a robot begins as a safety-enabled operator-controlled unit – much like a car today is outfitted with forward collision avoidance and sideview assist. All its sensors are enabled and collecting data, but its ability to “act” on its environment is limited to alerting the human operator, or bringing the vehicle to a safe stop. For example, a forklift that is fitted with sensors for safety could perceive a human in its path and come to a full stop before the operator can even react, potentially curbing the 110,000 major forklift accidents that occur every year.

From day one, a robot's active safety features protects the human workforce and saving on the cost of accidents. There is no risk of inadequate or undesirable autonomous behavior since human operators continue to be in control of the vehicle. By sensorizing a piece of industrial equipment for safety, all sectors can prevent death and injury, damage, and delays, and save billions of dollars annually.

Sensorizing industrial equipment for safety implicitly includes computing capabilities to process the sensor data. The processing power already available, can provide more capabilities than just operational aids and awareness: features can be introduced to make it more fully autonomous. That is: The equipment is not just ‘sensing’ the surroundings, it is ‘making sense’ of its environment.

Just like an office customer relationship management software suite, the consumer invests in the basic package, but after realizing initial return on investment, takes those cost savings to upgrade and turn on additional features - the same can be achieved with sensorized industrial equipment. For example, forklift accidents cost U.S. businesses $135 million annually. With the cost savings from reduced accidents through a safety-enable sensorized forklift, businesses can fund additional features toward full autonomy.

In addition to monitoring the vehicle for safety reasons, collecting all that sensor data also enables the system to learn how humans operate the machines in a particular environment. That data can then be used to provide tailored autonomy behavior.

Thus, the Safety-to-Autonomy Curve: the glide path on which an incrementally adopts robotic solutions.

Preparing for the New Robotic Economy

Naturally, robotics does not exist in a vacuum. Just as rules and regulations needed to be created around sharing digital media online, building skyscrapers, and driving cars, the next wave of policy will be around the use of automation. In fact, as this article is being written, the Federal Aviation Administration has proposed rules around flying drones – and struggles with developing regulations for businesses that plan to use drones as part of their business model. This is just one example of the regulatory realities our New Robotic Economy will face.

Policy needs time to catch up to the technology we already have at our fingertips. A recent report by the McKinsey Global Institute explains how policy makers need time to understand economic trends and nuances in region, innovation, and exports in order to create the right policies that support manufacturing industries and the role of automation within it.

In addition, so too do human workers need time to adjust their mentality to sharing their workspace with intelligent machines, and business owners need time to innovate their workflows and processes with the help of automation.

Safety-to-Autonomy as the Path to Rapid Adoption

By adopting the Safety-to-Autonomy approach, policymakers, business owners, and the workforce can prepare for the New Robotic Economy. Safety-to- Autonomy saves businesses from having to front capital to acquire fully autonomous machines, train personnel on new equipment, reconfigure and refine new processes, and for learning and understanding new policy all at once. Instead, the Safety-to- Autonomy approach allows businesses to use existing equipment and personnel toward safely innovating processes in a slow but steady way that minimizes disruption to delivering quality goods and services to customers while saving money. Rather than waiting for the Big Bang Theory of Robotics to radically and instantaneously change the status quo of conducting business, safety can secure the glide path for businesses to embrace the velvet robotic revolution across all sectors.