Claus Risager, Co-CEO
In recent times, robotics technology is widely recognized for delivering efficiency, reliability, low spoilage, and higher overall productivity. Owing to the benefits and also to realize its complete potential in the business domain, extensive research and development works are conducted to further improve the quality while obliterating various design and operational constraints in robots. Latest techniques and algorithms are making robots smaller, safer, more practical, and cost-effective to be used by organizations in multiple industries such as manufacturing, construction, and healthcare. Moreover, the convergence of robotics with a wide range of complementary technologies such as machine vision, force sensing, speech recognition, and advanced mechanics is offering increased levels of functionality. Well positioned to fulfill the demand for robots in different industries is the Denmark based firm, Blue Ocean Robotics that identifies the users and their generic challenges to develop robots as the solution.

“We are not interested in building one specific robot for a single customer’s need,” begins Claus Risager, Co-CEO, Blue Ocean Robotics. “We aim to partner with an organization, which represents an industry along with its obstacles and create a robot that can be used globally in resolving that issue.” The company has a partnership program—RoBi-X—through which it collaborates with enterprises for designing, developing, and commercialization of its unique robotic solutions. RoBi-X consists of three partnership programs— RoBi-Design, RoBi-Develop, and RoBi- GoToMarket. After the solution attains certain level of maturity, Blue Ocean Robotics develops a separate spin-out company for managing it. Blue Ocean Robotics today has developed 14 robots and spin-out companies subsequently.

“We at Blue Ocean Robotics design all types of service robot technologies,” says Risager. “To manufacture these robots, we have to use multiple sensors and software for perceiving the environment and interact with it as well.” The company also develops robots with large amount of embedded Artificial Intelligence (AI) and often as part of their collaborative robots. This type of robot observes people, identifies them, adjusts its behavior according to the nearby people, and learns by accepting commands through gestures, voice or behavior observations.

A few examples of robots being created and commercialized by Blue Ocean Robotics includes; A robot for disinfecting patient rooms at hospitals; A robot to manage on-shore based lobster production; A collaborative robot to feed metal plates to standard bending machines in the metal industry; A robot to paint buildings and avoid scaffolding; A new generation of floor washing robot for office and shopping mall spaces; A robot for safe patient handling in hospitals and nursing homes; etc. Besides these, the company offers robots that assist in part handling, processing, telemedicine, rehabilitation, and social therapeutic use.

The prowess of Blue Ocean Robotics is evident in the way it has helped end users to overcome specific business challenges. For instance, one of Blue Ocean Robotics’ client and partner—a construction firm— approached it for developing a robot that would simplify the glass mounting process. “Our client was facing troubles in lifting very heavy and large glass plates along with greater amount of damages reported in the glass plates,” explains Risager. “We developed a collaborative glass mounting robot that eased the job tremendously while reducing damages and increasing individual worker productivity by 40 percent.”

With a zeal to disrupt the robotics industry, Blue Ocean Robotics plans to maintain its steep growth curve while incrementing its portfolio with 12 more spin-off companies during 2016. For the long-term goal, “We want to be a preferred partner for companies in big industries while engaging in with them to build new robots as well as spread our operations in 75 countries around the globe,” concludes Risager. 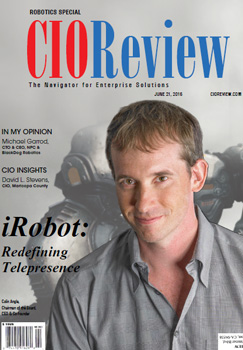